Don’t expect much from an SF movie that starts with ”To prove or disprove that …these bacteria get their oxygen (O2) from ammonia (NH4)”.

Just when I thought that there’s enough scientists redeployed in Hollywood to prevent this kind of mistakes even in a visibly low budget movie.

To confirm this, the author uses blatant misinformation. He writes in the abstract that “over a hundred subsequent controlled trials, conducted over seven decades, largely confirmed  [that dental caries prevention required the proper mineralisation of teeth and that vitamin D could achieve this goal.]”.

To back this up, in the introduction he cites two metanalyses published in 1952 and 2013. The latter _by the same author_ states that “Twenty‐two of the 24 CCTs predated modern clinical trial design… The relative‐rate estimates of the 24 CCTs exhibited significant heterogeneity (P < 0.0001), and there was evidence of significant publication bias (P < 0.001)…”.

On closer inspection “over seven decades” mean the earliest trial (if we can call it this) was in 1918 followed by a cluster of them in the 1930s and 40s, a gap of  40 years, two trials in 1975 and one in 1989. The gap that significantly changes the hypothesis perception from “for seventy years people were finding strong evidence but ignored it” to  “revisiting badly collected data 40 years later shows some significance”, 1989 – 1930 = 59.

In other words, the literature shows a possible significance of Vitamin D that does not contradict the widely accepted theory of plaque formation and necessity of oral hygiene to prevent it.

Extraordinary claims require very strong supporting evidence. The claim that dental hygiene prevention of dental caries is a ‘meme’ rather than an established paradigm is certainly an extraordinary claim. The author not only fails to provide strong evidence but distorts the evidence he has. Moreover, the article has hallmarks of a conspiracy theory, namely “bad pharma”.

I wonder if the article would’ve been accepted in a journal with a similar impact factor  if the author wasn’t on the  “Gerodontology” editorial board.

I don’t dispute that caries is a complicated process dependent on the multitude of factors, including genetic, microbiome and nutritional components that determine teeth resilience to caries-causing bacteria. I also don’t doubt that the pharmaceutical industry has been making exaggerated claims about dental hygiene efficiency. But all this does not support the idea of modern oral hygiene futility.

It’s not often that word romp comes to mind while reading a popular science book. On the other hand, if the book is about ‘science of sex’, maybe it’s inevitable.

I think that the author, a Times science journalist, is trying hard to be objective. But the old stereotypes of male supremacy keep poking their ears above the hedge of selected scientific facts.  He avoids some cliches of gender science but slides into the other.

Somehow only facts that are non-threatening – at least in theory – for a straight man get an airing. The legendary disbalance in male and female fertility is demonstrated by amusing historical anecdotes of a Sultan of Morocco with his 600 sons and ‘wife of a Russian peasant‘ – she doesn’t have a name – who’s allegedly had 69 children.

The classic experiment “male students want to go to bed with strangers, females don’t” gets a long description. But the social explanations are barely mentioned and dismissed in this case and the other similar cases.

The author also allows women sexuality and infidelity as a norm, talking about two strategies – selecting a handsome rogue on the off chance of him changing his ways and long play in the chance of securing his desirable genes for her sons. He also talks about the fluidity of female sexuality – the cited research suggests that most women are bisexual. For example, 20 percent of modern younger women experimented with same-sex affairs while only 2 percent of the older women while there’s no dramatic increase for men.

Having read  Cordelia Fine’s excellent book “Testosterone Rex” the author quite suggest that everything is ruled by testosterone and as an average man has more of it he’s destined to rule the universe forever.  But the selection of facts suggests that – he keeps telling about men being the majority of CEO nudging towards the conclusion.

He does not nudge but bludgeons the readers by a Darwin quote about the eternal inferiority of women as a result of sexual selection. Surely, the father of evolution theory who lived when women were forbidden the higher education, cannot be wrong.

This is a book clearly written by a non-academic. If similar books (such as mentioned “Testosterone Rex” ) written of academics are often a dense read with meticulous referencing, this book conforms to journalist cliche. Chapters start with life stories, often only tenuously connected to the research. And research fizzles out.

You may think that as a card-carrying equalist (= feminist) I am biased. But without underlying ideas, the book is just a random collection of facts about human sex designed to earn the author some money. Oh, wait… the author is the journalist that earns his living by packaging facts for public consumption.

Is there a point in spending time reading this book? Sure, if you enjoy the facts and witty writing while being aware of the bias.

The first book of the Israeli historian Yuval Noah Harari  Sapiens: A Brief History of Humankind made The New York Times Best Seller list and won the National Library of China’s Wenjin Book Award for the best book published in 2014. It is a  panoramic view of the human history from a surprising angle. While the history taught in schools mostly tells it as a chain of events, Harari tried to look at the species development as a product of several revolutions – cognitive, agrarian, industrial.

The second book reiterates a few of the first book’s points and I think these are the best parts.  For example, did you know that in Babilon swathes of the country were owned by gods via temples?  Concerning history, Harari is on familiar ground. However, his attempts to continue the imaginary line of Homo sapiens development into the future is much less successful. He overpromises and underdelivers in the second book. END_OF_DOCUMENT_TOKEN_TO_BE_REPLACED

Another one of the Canadian/Netflix on demand series, Between season 2 became available in June. A virus kills all inhabitants aged over 21 in  a US town called Pretty Lake. The town is quarantined and the children and young adults are left to fend for themselves,  leading to a YA “Lord of the Flies”. Of course, there’s a government conspiracy, which creates an unlikely situation of supply airdrops absence.  But despite a few plot holes, The characters are compelling, the plot moves along nicely.

Unfortunately, unlike in my favorite human cloning series, Orphan Black, the science of Between is completely bogus. A scientist who sneaked into Pretty Lake with  an experimental vaccine looks at something round and red swirling on the screen (red blood cells?) and the vaccine represented by a yellow  shimmering circle around them. He says that the virus sits inside cells and eats them  from inside out, which is represented by churning and undulating cells as if an alien is trying to get out. The cells resist the virus until the 21st birthday date when boom! cells collapse and the person dies.

21 is the age of adulthood in the US when you suddenly allowed to drink, while you could marry, drive a car and join the Army before that magical date. From the biology point of view, 21th birthday is a completely arbitrary date. A  virus wouldn’t know when precisely you were born – it’s virus, not a notary. In the absence of a document, it’s difficult to even estimate a persosn’s age – people who don’t have their birth certificate pass as underage for years and a convincing fake ID would age you.

Yes, there are viruses, which cause diseases in  (mostly) children, for example, notorious mumps, measles, and rubella viruses. This apparent age specificity is caused by  children’s underdeveloped immune systems as it’s still possible to get infected as an adult if you miss the childhood infection or not vaccinated. Assuming, that it’s possible to create a virus, which targets adults, it should hit anybody who reached an age of puberty, which can vary between 10 and 20 depending on the environmental conditions.

It’s the general condition of your body that would matter to a virus, not your birthdate. We all heard about a sprightly 90 yeas old, who run marathons and know 30 y.o. who look and have the health conditions of people of twice their age. 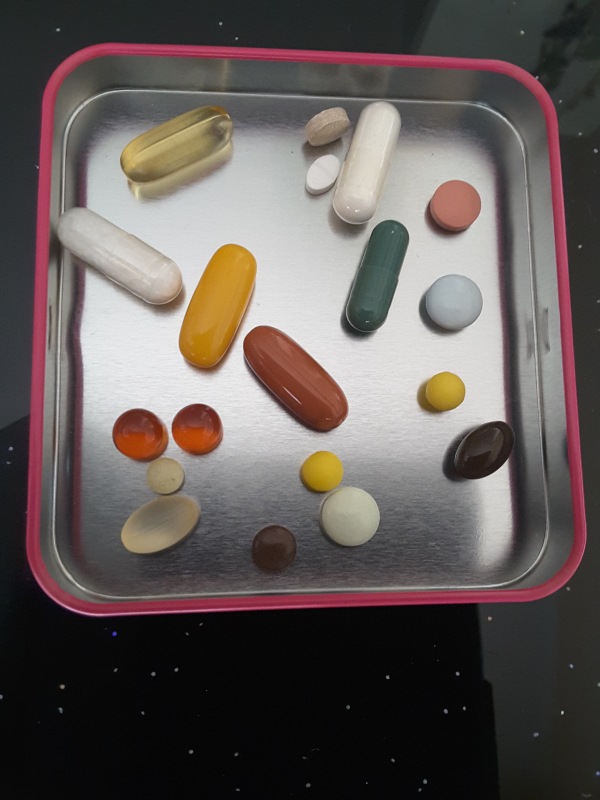 In The Stylist beauty issue, there is a feature article about nutricosmetics, defined as “beauty products you ingest rather than apply”. The rationale – skin/hair/nail are growing things, which you can supplement from outside (the usual “beauty products” – lotions and creams) or from an inside  – in a pill form. Sort of spray on the leaves fertiliser vs. fertiliser in the soil for your plants.

Sounds good if you don’t pay attention to the caveats mentioned in the article:

A)  As the skin is outside of the body, whatever product you are eating, you need to saturate the body from within to get to the skin.

B) The air conditioner argument. Your body is like an air conditioner – when it overshoots the set temperature, it compensates by cooling, sometimes overshooting in the other direction but eventually returning to the balance. So if you try to increase the concentration of say, vitamin A by eating a lot of it in one go, after a short spike the excess is removed via urine, and there is an actual drop in its concentration. And if it accumulates, you skin turns orange and it becomes toxic.

Let’s have a look at the products mentioned in the article about nutricosmetics:

Lumity – £90 ($135) per month for a cocktail of lysine, arginine, and glutamine. These are aminoacids,  building blocks of protein. I don’t have a problem with this, except that you should be getting enough aminoacids from you food. And if you want to top up just in case, you can buy aminoacids in any health shop for 1/10 of the Lumity  price. END_OF_DOCUMENT_TOKEN_TO_BE_REPLACED

Men have it easy if you consider the volume and degree of bullcrap associated with products targeted to women. Maybe the marketers think that men are less inclined to believe bull or they are more critical or more scientifically minded. Or afraid to scare off men, who for centuries survived without skin products beyond hair grooming. But as the number of men’s grooming products increases to include eye creams and moisturisers the bullshitters are moving into the new territory.

Take the Autumn/Winter Style Issue of  British  ShortList magazine. One its features were about men’s grooming products, which contain unusual ingredients.  Some of the ingredients don’t raise my eyebrow – I know about the vast spectrum of biologically active compounds, which plants accumulate. I would never argue that, for example,  Camomile extract does not soothe skin irritation, or that tea tree oil inhibits blemishes.

But let’s have a look at the list, assuming that the title ingredients are not present in “homoeopathic”  e.g. “name only, no substance” quantities.