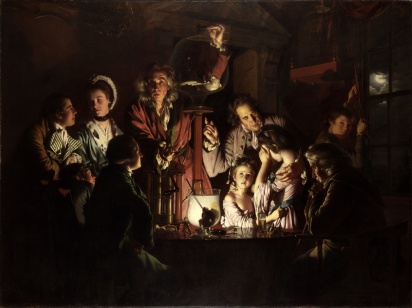 Unlike his self-explanatory “Alchemist discovering phosphorus,” another painting of Joseph Wright of Derby, “An Experiment on a Bird in an Airpump” (right) is an enigma for a 21st-century viewer. Who are people surrounding the table? Why is the parrot in a glass bowl?

What is an air pump?

I don’t think I need to convince you that air has pressure and you can remove air from a vessel leaving a vacuum – or more likely thin gas – inside. But for people in pre-scientific time air was something indivisible like other elements – fire, earth, and water.

The air pump, which can suck the air out of a vessel, was invented by Otto von Guericke in 1650. One of the lucky first possessors of the air pump was “the first modern chemist” Robert Boyle. You may remember him from Boyle’s Law. Boyle conducted experiments with the pump and published a book about it in 1660. One of the experiments describes air removal effect on a bird:

END_OF_DOCUMENT_TOKEN_TO_BE_REPLACED

The picture, oil on canvas, by Joseph Wright of Derby (1734 – 1797), first  exhibited in 1771 with the original full title of “The Alchymist, in Search of    the Philosopher’s Stone, discovers Phosphorus, and prays for the successful  conclusion of his operation, as was the custom of the ancient chymical  astrologers” (derbymuseums.org, 2014).

Joseph Wright was an English landscape and portrait painter, who was “the  first professional painter to express the spirit of the Industrial Revolution”.

Just as astrology – study of cosmic objects alleged influence on human life –  was a forerunner of astronomy, alchemy was a predecessor of chemistry.  Alchemy studied ways to obtain a magical substance, Philosopher’s Stone,  which was supposed to be a source of eternal youth and, as a side effect,  converted common, cheap metals such as lead to gold.

“Alchemist discovering phosphorus” is the Wright’s depiction of a real event.  In 1669 German alchemist Henig Brand after collecting and evaporating  human urine discovered a waxy substance emitting white light. Later,  analysis has shown that the substance was a chemical element, phosphorus.